The crackle and jerking of a primitive wooden donkey wagon creeps in shame through the bushveld around the South African minefields. Of blood and madness the passengers reek, as it was in the 1880’s when gold was discovered in the Zuid Afrikaanse Republic . The great divide between better and worse was clear to see on this very cart, yet things never stay the same.

Foreigner outlaws trouble, kill, steal and intimidate the local miners from their gold and claims. In front sit three greedy men, all from different countries other than South Africa. Tied up, beaten and hanging on to worthy lives sit their captives behind them. The closest to the end is a man they should never have kicked off to leave in the dust. His spirit might look to be leaving his body soon, but it is his faith, heart and incredible fight that they haven’t noticed, not yet.

In a time of illegal, but abundant slavery our hero in the dirt gets rescued by a meek native man, vicious the tales might go, but fairness and nobility stand just as tall. As the Zulu man, approaches with honest concern, he is forced to meet the black storm of power contained in the most majestic of horses. A horse that will follow his owner, partner, and leap into a duel with death itself without any fear. Luckily the Zulu warrior has a sincere way about him that calms down the wily, snorting beast just enough to let him come closer. The animal finds trust in the compassionate man.

At a village close by, Colt heals fast and learns a few profound lessons in the brutal discipline of Zulu Stick fighting. He will need everything he can for his unfathomable journey filled with extremes he could never have expected. The Zulu King finds interest in this rough, lone, roaming stranger. It is clear that he has lost his most treasured, his loved ones, and a glimmer of hope to still find one overwhelms all restraint and restrictions.

Duza was appointed to shadow Colt. Yet, other than Colt being adamant about not needing another partner besides his stead, Duza could be enslaved at any time.

Towards the end of the 18th century, the South African goldfields in the Eastern Low veldt was a boiling pot for immigrants, settlers, traders, adventures, outlaws and anyone trying to make a quick buck. Justice had to be sharpened up and Paul Kruger’s ZARP’s, “Zuid Afrikaanze Republic Police”, was founded.

Kruger also knew that a war was brewing with the British who wanted his country for its gold. The gold was going to fund their defence against the British. He was discussing this very topic with his counsellors on a train through amazingly scenic South Africa when a terrifying gang of outlaws attacked.

Luckily, as fate would have it, just a few carriages down, where the horses were kept, the midnight colour stallion and his partner rested carelessly. The solid black clothing of Colt forces you to take serious notice of this man and tread a little more cautiously around him.

Bullets flying from the barrels of the outlaws ricochet around through the air. It wakes him up slowly. Gun fights he has seen and conquered plenty of. As unfazed as is inhuman he starts making his way down the cabins while draining the bandit numbers with precision and raw strength.

The president’s door swings open to the gang leader’s back, the subject of Colt’s revenge. Dalton, a cold and relentless murderer has his sights firmly on the president, but not while Colt is around. Not today.

The remaining members of the gang retreat and escape.

That night, out of gratitude Colt is invited to stay at the same hotel as President Kruger. The owner of this hotel in Pilgrim’s Rest is a fine, beautiful and determined woman who is out to return the favour to the Legend in Black. Unfortunately for her, he is not what she thought. There are lengths and strides more to this man than just a testosterone filled bounty hunter she finds out to her desperate disappointment.

That same night Colt is joined to the ZARP’s by his president.

At the Babylonian town of Long Tom bounty hunters and outlaws alike walk the same streets between the many gloomy hideouts. This is not a place for one sweet and conservative widow from a small gold mining town. Yet, she seeks to find the legendary rider in black, and this is where he is.

With a glimpse of gold, a greedy weasel of a man and a possible promise of closure he needs, he sets out towards her home town to help a helpless community.

The journey to Annie’s hometown holds a detour where they see the grandchild of the Zulu king captured and kidnapped by one of the immigrant outlaws from the donkey wagon. Colt does not have to think twice about rescuing the rambunctious and proud little boy.

As they arrive at the small gold digging town, Colt is disruptively welcomed by the possessive local men.

Their problem, the Ghosts gang that terrorise and plunder at bloodthirsty will.

Another surprise waits on the hip of this quaint little gold digging town in the decadent shape of a royal dress’ lace and the strings of a corset all the way from Russia. A slightly bitter, yet utterly lovely Princess has found her way to the South African Gold as well. She has swept up all that the locals knew and bought it with money they cannot bid against. She is out of place, out of her comfort and out of favour here. She shines with indescribable beauty, especially being surrounded by filth and greed. Her story has a strange and mysterious number of holes, troubles and eyebrow raising actions in the darkest times of the days. Colt finds himself securely in her sights.

Colt is taken deep into a spiral of rescues, confrontations and run-ins with ruthless bandits, a seductive jezebel, greed-rotten slave traders and gold smugglers. This is nothing new to a seasoned bounty hunter, but the intricacies and connections between the handful of creepy and mysterious occupants of the area he could not have prepared for. And what he could not foresee is the sweet but strong beauty that Annie harboured in his heart…

All nations are in a time of nostalgia. Fathers will remember the old Western movies, how the hero’s beat up all the outlaws and saved the women. The time is right to let the hero of old and young come alive on the big screen as: “The Legend”.

The fathers will take their children to see the legendary rider in black in an action packed adventure, drama and love story. The mothers will take their daughters to show them how a real man should behave. Every woman wants to feel wanted and be fought for. The story of “The legend” will capture the audience and take them on a journey into another world of the 1880’s. 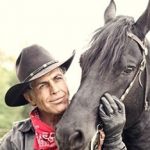 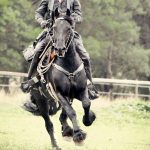 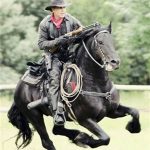 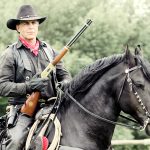